In open circuit cooling towers, there is a direct contact between the water to cool down and the air.It is a heat exchanger that in order to cool down water makes use of the direct contact with the air. The heat transfer occurs partially thanks to a heat exchange between air and water, but mainly thanks to the evaporation of a small quantity of the water that needs to be cooled. This will allow to cool down to a temperature lower than the ambient temperature.

Open circuit cooling tower is an enclosed structure that distributes warm water over a labyrinth-like packing, or fill, which provides an expanded air-water interface for heating of the air and evaporation to take place. The water is cooled as it falls through the fill, and is then collected in a cold water basin below. The heated moisture-laden air leaving the fill is discharged into the atmosphere.

It discharge heat from water-cooled systems into the atmosphere. The hot process water is distributed over a fill pack (heat transfer media) to interface with air blown by a fan through the cooling tower. During this evaporative cooling, a small part of the water evaporates while cooling the remaining process water. 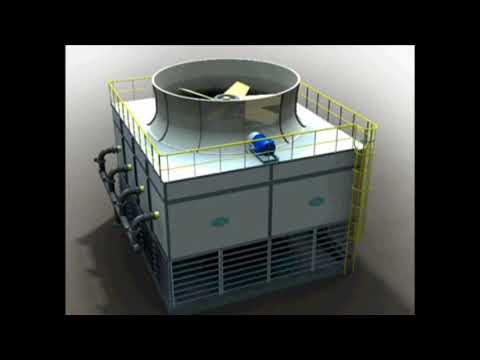